The average age of this year’s Tucson Roadrunners is 23.54 years old, making them the third-youngest team in the American Hockey League.

No club has less AHL experience, either. According to the hockey statistics website EliteProspects.com, the Roadrunners average 1.84 seasons of AHL experience per player — more than two months less, on average, than any other team.

So it makes sense that, with its lineup decimated by NHL call-ups, Tucson general manager John Ferguson Jr. has added more experienced reinforcements.

This same pair can also be largely credited for stopping a losing streak. Broadhurst scored a goal while McIntyre stopped 31 of 32 shots in the Roadrunners’ 2-1 road win Sunday at Iowa.

McIntyre, 29, and Broadhurst, 32, are the oldest players on the Tucson roster.

“Mentorship is important,” Tucson head coach Jay Varady said. “(Broadhurst has) been in the league for a long time. So I’ve known the name; known the player. But I haven’t known the person. The opportunity to meet the person has been a good experience.

“(McIntyre) was waiting for his opportunity, patiently, but also working and pushing everyone in practice. He got this opportunity and he was ready.”

Broadhurst and McIntyre have plenty in common. Both have a deep college hockey pedigree; McIntyre spent three seasons playing for NCAA powerhouse North Dakota, while Broadhurst played three years for Nebraska-Omaha, spending his final season as the Mavericks’ captain.

Both have experience playing mostly in the East, though they’ve never played on the same team before this season. Both were signed to professional tryout contracts two days apart earlier this month.

Broadhurst has contributed three points in six games for Tucson — including the game-winner Sunday. However, he relishes the idea he can provide more than just an occasional scoring touch.

“I was extremely fortunate when I was young to have some really important veterans that helped me along the way. So it’s kind of my job just to pass it on,” he said. “I know this is a stressful job at times. It’s a little bit of a roller coaster. So if I can create some calmness and just keep these guys even keel and let them understand, ‘Hey, if something bad happens forget about it move on. We got another one coming.’”

Should Broadhurst dress for both 7 p.m. games this weekend, he’ll notch his 300th career AHL game played. That milestone spans six cities over eight seasons, and includes (through 298 games and counting) 48 career goals and 141 points.

Broadhurst had to play his way back into the league. He spent the entire 2020-21 campaign with the ECHL’s Indy Fuel, carding six goals and 19 points in 21 games.

McIntyre signed with Tucson following a quiet offseason — something that may have been surprising given that he had a .917 save-percentage mark in 19 appearances last season. His 2.33 goals-against average was fifth in the league.

“The biggest thing that drew me here was just a job offer, you know,” McIntyre said. “There were a couple teams kicking the tires, but no one was actually offering.

“So got the phone call, and I just want to take advantage of it.”

McIntyre had a relationship with Ferguson, the Roadrunners’ first-year GM. McIntyre spent his first four AHL seasons with the Providence Bruins; Ferguson was director of player personnel for the parent club Bruins the entire time, and Providence’s general manager the from McIntyre’s second year on. McIntyre was also brought to NHL camp with the Coyotes on a tryout prior to the 2021 campaign, only adding to the two-way familiarity.

“A lot of emotions. A lot of stuff going into it,” he said of getting the nod to start Sunday. “It’s a combination of going back over the summer, during training. Staying with it. Trusting it. A little (bit of) hard times not getting a contract out of free agency and what not, and sitting at home and waiting. But then a couple of weeks ago, signing the PTO and coming here. I started preparing myself every day to come in and do the work and get ready for that opportunity.”

McIntyre’s AHL body of work, statistically, speaks for itself. In 203 appearances over seven seasons, his career 2.50 goals against average and .911 save percentage are top notch. His teams are 113-56-25-14 when he’s in net — a career 63.7 point percentage.

Tucson has only twice in five previous seasons finished with a mark above McIntyre’s career number; both times, the Roadrunners hung Pacific Division championship banners in the Tucson Arena rafters.

Has McIntyre earned more starts, even after just one game in a Roadrunners’ sweater? The answer’s complicated.

Varady must balance Ivan Prosvetov, Josef Kořenář and McIntyre in net moving forward. Who plays will depend on a combination of factors, including how practices shake out, who has the hot hand, or even what the Coyotes are looking for in terms of game experience for the highly-touted Prosvetov.

“It’s not just with our goaltenders. It’s all the way through our roster,” Varady said. “I don’t think there’s anything different in terms of how we deal with the goalies.” 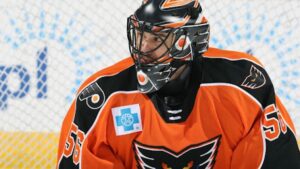 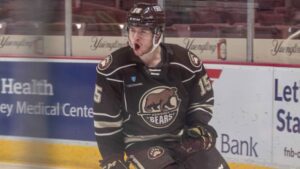 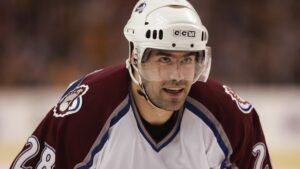